In an interview with BarÁa TV and www.fcbarcelona.cat Ibrahim Afellay talked about his arrival at the club and stressed the ďgood feelingĒ heíd had after his first contact with Guardiola, as well as how much the Stadium had impressed him.

What were your feelings after your first day at the Club? 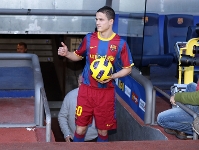 “It was a great day for me. It was special –and very long too! There were a lot of medical tests. When I saw the Stadium it was a really special moment, it looked so big and beautiful”.

What does it mean to you to be a BarÁa player?

“Every player wants to play here at least once in their life and when I do, it’ll be like a dream come true”.

What’s your first memory of BarÁa?

“Players like RomŠrio, Ronaldo, Koeman’s goal at Wembley…. and Cruyff of course, and others such as Cocu or Kluivert.”

How did you feel when you first heard BarÁa were interested in you?

“I was very happy. It was a special moment, my manager called me up and I told him straight away that BarÁa were my first option. The negotiations were very quick and everything went smoothly”.

Had you ever imagined you’d play for BarÁa?

“As a BarÁa fan, you watch the team as a kid and you imagine playing there, but as you get older you realise you have to be very special to be at this club”.

You joined the PSV first team when you were just 17, what was that like?

“Everything was new for me and it was tough at first, all my teammates were older and stronger than me”.

How would you describe your seven years at PSV? 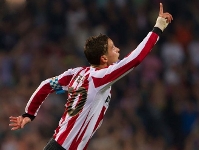 “So far it’s the only club I’ve played for. I went through the youth team and into the first team - it’s a big part of my life”.

Who has been the best coach you’ve ever had?

“There are a lot who have been important, but I would say the best has been Hiddink. He decided to bring me up into the first team squad and I am still in contact with him. Above all, Hiddink showed me how to live as a professional, because football is a very hard job, from the outside it can seem very nice, but there is a lot of hard work involved”.

Do you consider yourself mature at the age of 24?

“Yes. I’m still young, but I’ve played a lot of games. I’ve been to a European Championship and I was at the last World Cup. All that experience has been good for me”.

Have you been following BarÁa this season? 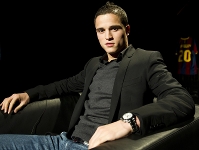 “Yes, and for a long time now. BarÁa play the best football in the world. Obviously, since the first contact was made, I’ve been taking a much closer interest too”.

What do you think when you see games like the Real Madrid clash?

Many say that was the best game ever, would you agree?

“Yes, I would, though the 2-6 at the Bernabeu was also a great game – in both matches BarÁa played football from another planet”.

How do you think you will adapt to the team?

“I’ll work hard and do my best. It won’t be easy at first, but I’ll do everything I can to win a place in the team”.

You are a versatile player. What’s your favourite position?

“I can play in a lot of positions. I have lots of options in midfield. It’s up to the boss where he uses me and wherever that is I will try and do my best”.

What was your first conversation with Josep Guardiola like?

“Positive. He welcomed me to the club and he transmitted a good feeling”.

What do you think about being able to ply with players like Iniesta or Messi – some people have compared you to Iniesta. 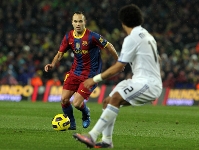 “They are the best in the world. I can’t wait to play with them. I can’t compare with Iniesta, he has so much quality. Every player is different and has his own points”.

What has impressed you about BarÁa so far?

“Undoubtedly, the Stadium. I’d never been here and, well it’s majestic and on TV it looks great, but in person it’s so big it just leaves you open mouthed”. 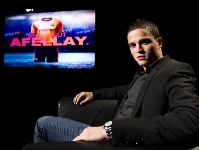 You can play with either feet - how did you learn that?

“On the street when I was little. If the ball came to my left, I’d shoot with my left, and if it came to my right, with my right. Now, every day after training finishes, I stay a bit longer to try and improve my left foot”.

You are Dutch, but your family is from Morocco. What is your feeling towards your parents’ country?

“My parents are Moroccan and so I feel half Dutch and half Moroccan. When I have a holiday, I go back to Morocco to see my friends and family there”.

What was a typical day like for you as a boy?

“I went to school and always played football afterwards. Sometimes I played so much that I forgot about school – I wasn’t a very good student (he laughs), but I got my qualifications”.

You were born in quite a poor quarter of Utrecht and your mother still lives there doesn’t she?

“Yes, it’s a nice place and I have a lot of friends there. My mother still lives there and she is the most important person in my life. For me the family is very important.”

How would you describe yourself?

“I’m just a normal person. Maybe I seem a bit timid at first, but I open up when I get to know people. Really though, I don’t like talking about myself”.

What are your plans over the Christmas break?

“I’ll go off to spend time at home with my family and be back here on 29th”.