Ibrahim Afellay has signed a four and a half year contract with a buyout clause of 100 million Euros.

Ibrahim Afellay signed the deal at 11 o’clock this morning. The 24-year old’s contract is for four and a half years and includes 100 million Euro buyout clause. 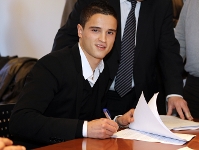 Barça have paid PSV 3 million Euros and the Dutch club will receive a percentage of any sell on fee. The deal also includes an agreement for Barça to play PSV in their centenary match in 2013. 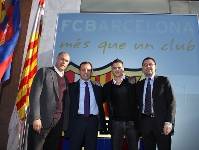 The Dutch forward signed the deal in President Sandro Rosell’s office at the club and as well as the President, Vice President Josep Maria Bartomeu, Sporting Director Andoni Zubizarreta, Director of Football Raül Sanllehí and the player’s brother and his representative were also present.

Immediately after the signing, President Rosell and Afellay moved outside the club’s offices for the traditional photo in front of the Barça coat of arms. 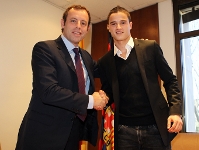