“The return will be a fantastic game”

“The return will be a fantastic game”

After the scoreless draw at the Camp Nou, Barça’s cup future depends on the trip to San Mamés. Guardiola is already looking forward to what he is sure will be a fantastic game”.

FC Barcelona will be facing Caparrós’ side again in two week’s time, this time at San Mamés, which is never an easy place to go and play.

Guardiola considers the second leg “a new challenge” and is convinced “it will be a lovely game. It is a wonderful chance for us to once again show what we can do. The stadium will be full, there will be a cup atmosphere and there will be fast attacks … let’s see if we can put them where we want to and make it through to the next round”. 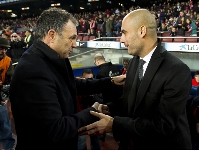 The Barça boss knows that at Athletic Club “nothing is over until the final whistle”, and agrees with Joaquín Caparrós that qualification is 50/50. He also feels that the 0-0 draw was good “because it put us in our place after so much praise”.

Missing something over final metres

On Tuesday night’s game at the Camp Nou, the coach considered his team “was missing a bit of depth and accuracy over the last few metres … the result is what we deserved. If we didn’t score, it’s because we didn’t get everything right. They didn’t create much danger, and we did try, but it’s never easy. They played knowing that there was a second game still to come, and they are a team that knows how to play cup matches … but now we have to get some rest, and prepare for a dangerous game against Levante and then we’ve got the cup second leg”. 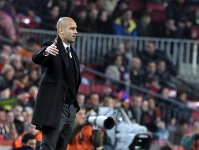 With Christmas around the corner, Guardiola also looked back at 2010: “We have played some top quality football this year. The people that love us have enjoyed themselves and also people that like good football. Nobody is hurt and the club is generally stable. It has been a good year. The team has won an incredible number of points and played some great games. What we have to do is keep this going, because there are two tough months ahead of us against difficult teams. It will be nice to get some rest before we prepare for the game with Levante, who are a dangerous team. I wish you a merry Christmas and a very happy new year”.