"We have always responded to difficulties”

Alves: “We have always responded to difficulties”

FC Barcelona full back Dani Alves believes he is in a team can turn the tie around against Athletic Club. After winning 10 games in a row, the Brazilian knew that “one day the record was going to end”.

The squad knows that the Copa del Rey is as open as ever after the goalless draw at the Camp Nou. But the Barça players aren’t overly bothered because they know they have overcome more difficult challenges than this in recent months. As Dani Alves said, although San Mamés “is a difficult ground …. The team has always responded to difficulties”.

Alves feels that the only reason the 10 match winning spell came to an end was because “the run had to end at some point”. He felt the team played well, and all that was missing was the goal, and that they can take many positives out of playing against such a well organised team”.

The following were some of the most interesting comments made by the players after the game. 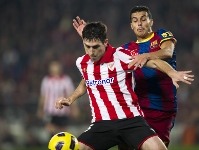 “We have to go to San Mamés, a difficult ground, and we have to think about winning and making it into the next round”.

“The strikers don’t like these games because they are closed out so much. It is a shame we didn’t get the win”.

“We have to go out with a winning mentality and get a good result that will put us into the next round”.

“I’m fine, I feel fit. But I’d highlight what the team did”.

“I think this is the best form Barça have been in since I’ve been here”.

“The stars who resolve games are other people. I just try to do the best I can and follow the orders from the boss’”. 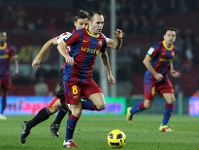 “We’ll go there to do a good job against Athletic, but knowing they are a tough team, especially when they’re at home”.

“Whatever happens, the tie was always going to be decided there”.

“We controlled the game, but they defended well. We’ll go and try to win in Bilbao”.

“When a team does all it can to win and doesn’t win, that’s football. We are thrilled by the idea that we can still win the tie”.

“The fans shouldn’t think we can win every game 5-0. These games aren’t that easy”.

“What we need to take out of this is that we tried. Now we have to wait for the return leg”.

“It was not a good result. The worst thing is that we didn’t score but we’re not throwing in the towel. We’ll go there to sort the tie out”. 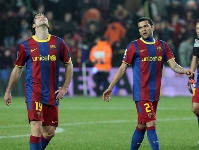