Preparing the last game of 2010

Preparing the last game of 2010

The squad trained on Monday ahead of Tuesday’s Cup clash with Bilbao, with only Messi, who worked out in the gym, the only first team player missing.

In the first of the two sessions Guardiola has to prepare the Cup tie against Bilbao on Tuesday at the Nou Camp, Leo Messi was the only first team member who was absent, as the Argentinean worked on his own in the gym. 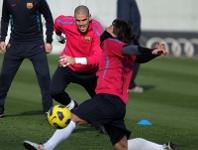 Milito and Jeffren, who are both coming back from injury, were at the session alongside the other 16 first team squad members, but the Argentinean defender only took part in some of the session with the rest of the group, whilst Jeffren again worked alone with a trainer.

Unlike Sunday, when a total of eight B team players trained with the first team, only Thiago from the reserves took part this morning. 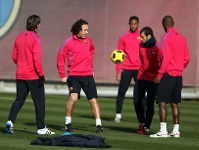 Nou Camp session in the morning