Alves: “there’s no ceiling for us”

Alves: “there’s no ceiling for us”

Dani Alves reckons that he can see no limits to how far this Barca team can go, but insisted that the team must: “keep up our habits of hard work and humility”.

The team is still showing its hunger for wins and titles and Dani Alves explained that he still believes they can improve: “this team has no ceiling to its improvement. We’ve been showing on the pitch how we’ve got better. We found it hard to finish games off at the start of the season. Now we are on a great run, though we have to keep our feet on the ground”.

Although it’d be a tough challenge to repeat the six titles won in 2009, Alves insists: “there’s no harm in dreaming and with this team anything is possible. We are on the right track to being able to compete and nothing is going to distract us. With Barça, nothing is impossible”. 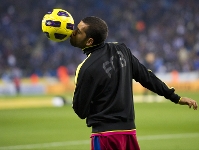 For the Brazilian, “we have to keep up our habits of hard work and humility. Now we have a break coming up and we can fill up out tanks to get through the next six months”.

Guardiola stressed the importance of the team’s solidarity after the Espanyol game and Alves echoed those feelings, insisting: “it’s down to all of us, both when we attack and we defend. We are all prepared to make a special effort. The squad is an example of how to work together. This is a collective game and we all need each other”. 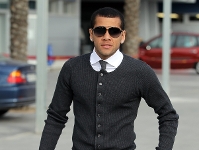 Looking ahead to Tuesday’s Cup game, Alves explained: “it’s a tough tie. There are two games and everything won’t end on Tuesday, there’s still a second game to come and we are just looking to play well”. Reacting to the news that Bilbao’s star striker Fernando Llorente looks set to miss the game, Alves commented: “he’s an important and vital player for them, but Bilbao are much more than just him”.

Alves surprised everybody when he gave his tip for the Balon D’Oro award, explaining that he felt Xavi should get it: “Iniesta and Messi are still young enough to challenge for it in many more years to come”. 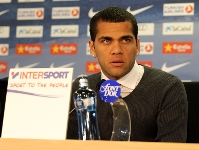 Alves also spoke about his contract renewal with Barça , reiterating that: “I don’t want to leave. I don’t want to go into it too much, I just want to focus on the day to day and do my job. I’ll not play any worse because I’ve not signed a renewal, I’ll be equally professional whether I’ve signed or not”.