BarÁaís keeper set a new personal record for keeping a clean sheet during the Espanyol game, racking up an amazing 576 minutes without conceding a goal.

BarÁa’s attacking power is undisputable, but they have also shown themselves to be a solid defensive unit, with the 51 goals scored and just 9 conceded in La Liga so far, revealing both sides of the team’s success. Victor Valdes has been a key part of that great defensive record and during the Espanyol game he pulled off a great save from Callejon in the first half, before Osvaldo beat him in the second when he’d already beaten his own record by six minutes.

From Nilmar to Osvaldo 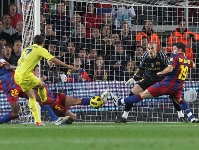 The last player to beat Valdes was Villarreal’s Brazilian striker Nilmar, who scored as BarÁa won 3-1 a month ago. That win was the start of an astonishing run of games as BarÁa brushed aside Almeria, Panathinaikos, Madrid, Osasuna, Rubin (when Pinto played in goal) and Real Sociedad. Osvaldo’s goal meant that Valdes had gone 576 minutes without conceding and beat his own personal record, which he set last season with 570 minutes unbeaten over a five game period against Bilbao in the Spanish Super Cup, Shaktar in the European Super Cup, Sporting and Getafe in La Liga and Inter in the Champions League. 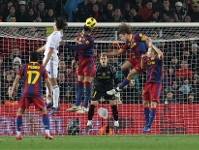 Valdťs’ 9 goals mean he is the La Liga keeper who has conceded least goals so far this season, 3 less than Iker Casillas and although there is still plenty of time left in the competition, the way the team are playing must make him favourite to add a new “Zamora” title to his collection come the end of the season. 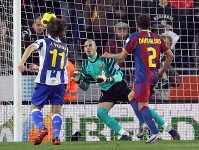