Andrés Iniesta will never forget Saturday’s game against Espanyol after the home fans gave him a rousing ovation in response to his famous gesture towards the late Dani Jarque in the World Cup Final this summer.

This was a high voltage derby game which most commentators were predicting would be a hard fought contest as first played fourth in La Liga. There were two moments though, when the Espanyol fans’ hostility towards their city neighbours turned to respect for one of the most popular figures in the Spanish game - Andrés Iniesta.

Name echoes round the ground 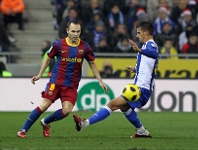 A Barça player had never before been given such an ovation by Espanyol fans, but as the loudspeaker announced the names of the Barça team, the booing and whistling turned to cheers as Iniesta’s name was called out and for 15 seconds his name was chanted in salute by the home fans. Then it was back to the barracking as the next Barça player was named.

As Andoni Zubizarreta commented at halftime: “it’s things like that which show football has more things to bring us together than to push us apart”. 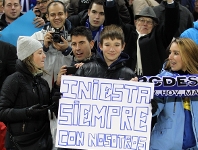 The second ovation for the Barça man came after the fifth goal when Guardiola decided to bring him off and send on Keita. Despite the score line, the Espanyol fans joined Puyol, Xavi, and Valdés amongst many other players in applauding Iniesta off the pitch. 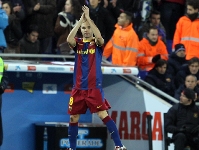 Andrés Iniesta followed up his gesture in the World Cup Final by donating the T-Shirt with his message to Jarque on to his late friend’s old club - something that once again showed what a good person he is and won him the warmth of what has to be one of the team’s most hostile rival fans.