In the last La Liga round of games before the Christmas break, Villarreal and Real Madrid both have big home games, whilst at the bottom, Zaragoza will hope for a win in Pamplona to lift them off the foot of the table.

Villarreal’s slip up last week makes Saturday’s game against Mallorca an even more important game to win, whilst Real Madrid know they need maximum points at all times if they are to keep within striking distance of Barça. Meanwhile, Zaragoza boss Javier Aguirre visits his old stomping ground in Pamplona as his team take on Osasuna looking for a morale boosting win before the Christmas break.

Villarreal’s excellent form in the Europa League has only been possible because Mallorca, who they meet on Saturday, were not allowed to compete in Europe this season and there is still some bad blood between the two clubs over the issue, with Mallorca’s board refusing to take their place in the Directors Box at El Madrigal for the game. On the pitch, Villarreal should be favourites – they are still unbeaten at home – and Mallorca have lost their last two games to drop down to 10th spot, 9 points adrift of their hosts. Villarreal welcome back Rossi from suspension, but are without the injured Marchena. On Sunday, Real Madrid host Seville, who like Villarreal qualified for the last 16 of the Europa League in midweek, but are in the middle of an awful run in La Liga, having lost their last four games on the run.

Valencia have won just one of their last four La Liga games, but remain within striking distance of Espanyol and they will no doubt hope to find Real Sociedad still shell shocked from their defeat at the Nou Camp when they visit Anoeta on Saturday night. Atletico Madrid are two points behind Valencia and after their midweek exit from Europe, the fans will be expecting a win from the trip to struggling Malaga. Atletico have won just twice on the road this season – but then again Malaga have won just twice at home. Getafe are also out of Europe, though they at least managed a victory in midweek , but three wins out of their last three La Liga games have lifted them into seventh spot, level on points with Atletico, and they will look to extend that run when they visit Almeria, themselves still buoyed up by last week’s win over Seville, on Sunday.

Aguirre looks for win on return to Pamplona

Almeria’s win took them out of the bottom three, where Sporting and Malaga accompany Zaragoza. With just one win all season so far and four points from their seven away trips, Zaragoza may find it hard to take anything from Pamplona, where only Barça have won this campaign, but their boss Javier Aguirre will want to pull a surprise on his return to the club he managed from 2002 to 2006. Sporting are just two points above Zaragoza and after a miserable run of eight games without a win, they travel to Deportivo , who can welcome back Riki and Guardado after injury. Levante are on 15 points, only two above the drop zone, but after beating Atletico Madrid in their last home game and drawing in Gijon last week, they’ll be hoping to beat Barça’s midweek Cup opponents Bilbao at the Ciudad de Valencia to go into the holidays in relative mid-table comfort. 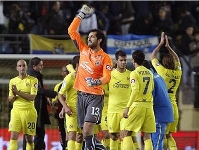 Hercules travel to Santander to take on Racing in Monday night’s game with both teams coming off important wins last week. Hercules hammered Sporting 4-1, whilst Racing took a valuable three points from the ONO Stadium. The stats are on Hercules’ side as they won the last La Liga meeting between the two in Santander, winning 1-2 in the 1996/7 season.