Andoni Zubizarreta believes that FC Barcelona's tie against Arsenal will be thrilling as both teams like to play possession football.

The Blaugrana sporting director of professional football was reflecting on the draw for Round 16 of the Champions League when he spoke to Barça TV after the event in Switzerland on Friday. Zubizarreta was unable to attend after heavy snowfall in Geneva prevented many from travelling.

"They are a team that always knows what to do with the ball," Zubizarreta said of Arsenal. "They see the game in a similar way to Barça and that is why I believe that it will be a great tie with two teams that respect good football. I would like it if the tie was being played next week." 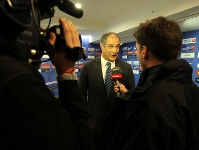 Cesc Fŕbregas will again face the club where he spent his formative years and Zubizarreta understands the spotlight will be on the Catalan midfielder. "Logically, a lot will be said about Cesc before the tie," he explained. "He is a player that began at Barça and it will be a special couple of games for him. He will meet up again with his international team-mates and play in Camp Nou, which he could not do last season."

On the derby on Saturday against Espanyol the sporting director added: "It will be a great game between two teams who have their own styles and that are both enjoying a great moment in the league. There will be a lot of passion in the ground and a great game will be seen. I am an optimist, like always, and I think that Barça will win all three points." 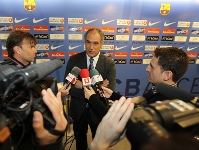 Amador Bernabéu, head of Institutional Relations at UEFA, represented FC Barcelona at the draw for the Round of 16 in Nyon, Switzerland on Friday as nobody from the club could reach the venue due to heavy snow. "The tie will be great between two huge teams," Bernabéu, who is Gerard Piqué's grandfather, told Barça TV. Piqué and Cesc Fŕbregas are great friends and the Arsenal captain knows bernabéui well. "They are great friends and have been so since they grew up together in the youth ranks at Barça," the UEFA chief said. "I remember Cesc spending many house at my house with Gerard. I hope this time we will see him play in Camp Nou."