Josep Guardiola chose to give his players a change of scenery for training on Friday as they prepared for the local derby against Espanyol by working out in Camp Nou instead of the Ciutat Esportiva Joan Gamper.

Barça take on the Blanc i Blau on Saturday evening (20:00, Barça R@dio) in Cornellŕ-El Prat and the players continued to perfect their game plan in very cold conditions in the Catalan capital. 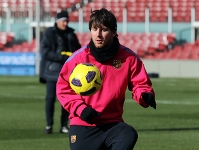 In what was the penultimate session before the game Guardiola had 20 players at his disposal on the Camp Nou pitch as all fit first-team players participated along with up and coming youngster Thiago Alcántara, who was once again promoted to gain invaluable experience at the highest level. 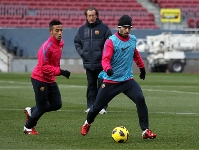 The traditional warm-up exercises and stretching routines at the start of the session were rigorous as the coaches ensured that no players were affected by the chill. Gaby Milito and Jeffren Suárez continued their individual recovery programmes and did not work with the main squad. 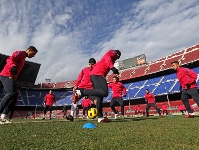 On derby day itself Josep Guardiola has organised for his FC Barcelona players to train once again in Camp Nou with the session starting at 11:30 behind closed doors.