Pedro, Messi and Villa have scored just once against Espanyol over the last three years, but with the three on fire in front of goal so far this season, Saturday is the perfect chance to break that record.

Pedro, Messi and Villa form Barça’s first choice attack and they are the highest scoring trio in the league, claiming 65% of the team’s goals so far. Messi is setting records seemingly at will, with 27 goals in his 22 games this season and Villa has bagged seven in his last seven league games. Pedro has also got back into the scoring groove with eight strikes in the last month. With one of the toughest trips of the campaign coming up on Saturday, the three have hit top form at just the right time. 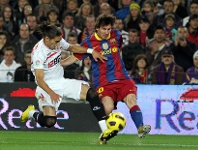 Leo Messi made his official debut with the first team at Montjuich in 2004 and has played eight times against the club’s city neighbours, scoring on three occasions. However, nearly all of those goals came at the Nou Camp and he has scored just once in the five away derby games he’s played – that goal coming in the treble winning season and helping to break a poor away run at the time.

Villa makes his first derby appearance for the club and he’s actually not scored against Espanyol for over three years, although he totals five goals in his 14 appearances against them. His last goal was in week 28 of the 2006/7 season when he scored the opener in Valencia’s 3-2 win.

Last year’s game was Pedro’s first against Espanyol and he has yet to score against Pochettino’s team. 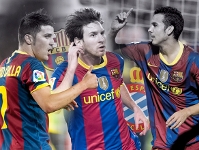 Bojan made his derby debut in the 2007/08 and has now played in four league games against Espanyol without scoring, though he did get two of the goals in Barça’s 3-2 Cup win in 2008/09.