20 years on from Guardiola debut

20 years on from Guardiola debut

This Thursday marks the 20th anniversary of Pep Guardiola’s debut as a player with the Barça first team, as on December 16th 1990, Pep played against Cadiz at the Nou Camp.

It wasn’t actually his first time with the big boys as he’d played in a friendly against Banyoles, on May 1st 1989, but the Barça team was made up of reserves and youth team players. However, with Guillermo Amor injured, Johan Cruyff gave the 19-year-old youngster who was having a great season with Barça B, his first real break in the game against Cadiz. 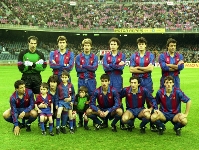 It was a great day for Guardiola. Used to playing in front of the relatively small crowds at the Mini Estadi, he was now given the chance to perform in front of more than 75,000 fans at the Nou Camp and he has since admitted that his palms were sweating and his pulse was racing as he waited to go out onto the pitch for the game. 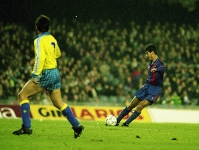 Although it wasn’t a great performance from the team who won 2-0 thanks to goals from Begiristain and Bakero, Guardiola did impress. He soon began to dominate possession and show his characteristic passing skills and despite picking up a yellow in the first half, he played even better in the second.

Determined not to let the team down, he played an important part in the win which left Barça six points clear of second placed Atletico Madrid. The win also helped the team to the Dream Team’s fourth League title on the run.

Start of a great career

Guardiola played just four more times for the first team in the 1990/91 season, but won a place in the team the following year when he played 40 times. He soon went on, of course, to become a key player during the Golden decade of the 90s and finished his time at the club after making 384 appearances. 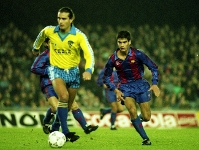 Guardiola was positive about his debut, declaring: “I’m really happy with the way I played, though I can improve. The great advantage for me was to be surrounded by players of such quality that it’s hard to play badly. Amor will play again in the next game and I will be back in with the reserves. I’m sure they will be demanding even more of me from now on, but I’ll accept that challenge. I aim to continue to show I can be of use to the first team”.

His manager Johan Cruyff was also impressed and commented: “it’s as if he’s always played with us”.