Messi: "It seems easy but it is not"

Messi: "It seems easy but it is not"

Lionel Messi believes that maintaining the level of performance that FC Barcelona showed against Real Sociedad on Sunday evening is not easy, despite the fluidity with which the team dismantled their visitors.

Two goals from the Argentinian and one apiece from David Villa, Andrés Iniesta and Bojan Krkic gave the hosts victory in Camp Nou . "It was hard work for us in the first half because they closed up at the back and looked to play on the counter," Messi explained. "Things are going very well for us and we are also playing very well. At some point this will end and we will return to normality. We do not think about it because week in, week out we play the same. It appears to be easy, but it is not."

Speaking to Barça TV after the game Messi added: "To change our menality, pressurising further upfield and playing the ball is the only way that we can continue to have success. We are enjoying a great moment in attack and also at the back. Each season we seem to be improving." During the 90 minutes the forward completed 87 passes, eight shots and scored two goals, with the first coming after a good combination with Dani Alves. "It was a quick move with Dani that saw him stay with me throughout and when I played a one-two with him it worked out well, fortunately," Messi commented. 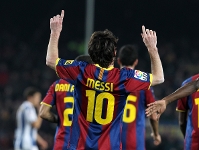 The two goals against Real Sociedad took Messi's tally to 17 league goals this term and helped him in his contest to be top goalscorer with Cristiano Ronaldo. "I am in a run where I am scoring goals, but that will stop at some point," he stated. "That does not worry me. What is important is the team and that we obtain what we set out to at the end of the season."

Messi is vying for the Ballon d'Or with team-mates Iniesta and Xavi and he believes that it is Barça who benefit. "It is a prize for the club and the squad because it shows things are going well," he explained. "Us three think that whoever wins will be good. It will be a player from the team and the club."

Looking ahead to the derby encounter against Espanyol next weekend Messi said: "It will be a very hard game like it has been in recent years and this season they are even higher up. I hope we can take all three points there and do what we did today in order to go into the Christmas break with a win."

The draw for the first knockout round of the Champions League takes place next week and Messi added: "I do not have anyone I especially want to play, they will all be good and we will prepare for that when it comes around. The coach said he does not want a French team. For me, the Italians are the ones I would like the least."


Below are a few more things that players had to say after the Real Sociedad win: 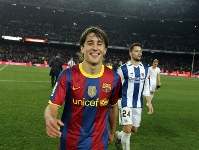 "We have won a few games on the trot now at a high level and we must enjoy the moment and try to continue."

"In these last few games we have come close to perfection, but we know that it is difficult to keep this up all year."

"For my goal I recovered the ball and looked for the one-on-one and I am pleasded because scoring makes me happy."

"The game against Espanyol will be tough. They are a good team and are doing well do it will be hard, but also a great game." 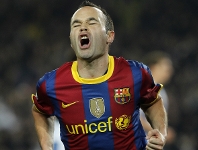 "We are in a good moment and doing things well so our intention is to maintain this until the end of the season."

"Scoring a goal is always great. Everything that can help the team like that is welcome."

"I scored today and on other days I have not so one has to and then take the chances when they come."

"To have started in 15 games is good news for me because it means that I am doing well and I am training well. Great news."

"The coach's words are always good and let me keep going. I think that Andrés Iniesta can improve. I want to keep growing as a player." 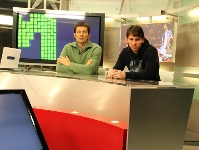 FC Barcelona return to training on Monday morning at 11:00 at the Ciutat Esportiva and afterwards Pedro will attend the press conference.