David Villa believes that there is little to separate Lionel Messi, Andrés Iniesta and Xavi Hernández and that all three of them deserve to win the Ballon d'Or trophy.

"One should be proud that Messi, Iniesta and Xavi are all vying to win it," he explained. "The three of them deserve to be there for different reasons. Messi because he is the best player in the world, Xavi because of his impeccable play and because he is the engine of Barça and the national team and Iniesta because of the great World Cup he had and the winning goal he scored in the final."

Villa also paid homage to Vicente del Bosque and Pep Guardiola as they were named in the top three, along with José Mourinho, for the coach of the year award. "Del Bosque deserves it for winning the World Cup," the striker stated. "Guardiola has had a great record since taking over Barça's first team. I will be delighted by whoever wins."

Real Sociedad visit Camp Nou on Sunday after spending four seasons in the second division and Villa believes that they will offer Barça a stern test. "It will be foolish for us to think it will be easy," he explained. "All games are very important and this one even more so as we know that they will come here with a great desire and looking to continue with what has been a good start to the season by them." 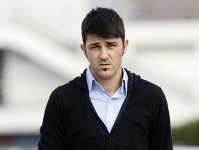 Villa likes clubs that give their homegrown players a chance to shine at the top like Barça, his first club Sporting de Gijón and Real Sociedad do. "It is difficult for players formed in the youth system to make it into the first division," he commented. "Barça have taken a chance on their youngsters for some time and it is admirable that la Real and Sporting have both been promoted to the first division with a homegrown base."

The Blaugrana goalscorer is enjoying the club's current of form and is revelling in his relationship with Messi. "I do not know if we are in our best form of the season, but it is evident that we are on a good run," he said. "Messi is not just the best player in the world, but he also has a good understanding with his team-mates. I have a great understanding with him and not just in terms of assists that we give each other, but also with the passes we exchange. I also have a good understanding with Pedro. Since day one I have had the help of all my team-mates, but especially Messi." 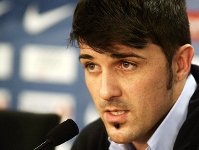 David Villa congratulated the Barça board on the agreement that has been reached with Qatar Foundation to carry the name on the shirts along with Unicef. "It is a club decision and we should not judge it, but if it is good for the club then it is good for everyone, both individually and collectively," he said. "We are pleased with the agreement."