Barça will wear the World Club Cup Winners logo on their shirts for the last time –this season at least –on Sunday against Real Sociedad, after holding the title for the last 12 months.

On December 19th last year, the club won their first ever World Club Cup title when the beta Estudiantes 2-1 in the final in Abu Dhabi . Since then, the team have won the logo World Champions 2009” on their shirts. 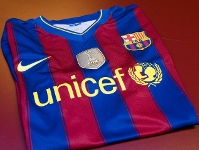 FIFA authorises the Champions to wear the logo during the 12 months they hold the title and it was for their home game against Valencia in March 2010 that the logo first appeared on the team’s shirts, just between the Nike trademark and the FCB badge. The logo measures 5,8 x 7,8 mm and shows the trophy and the inscription ‘World Champions 2009’. 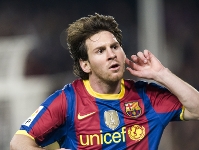 Sunday’s will be the last game Barça can wear the logo, as with no midweek match next week, their next game is against Espanyol on Saturday December 18th – the day that the final of this year’s tournament takes place and a new team will take over as World Champions. 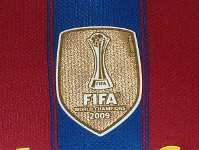 Many fans have wanted to have the World Champions 2009 logo stamped on their Barça shirts to mark the team’s historic win last December and the FCBotiga Superstore at the Nou Camp has put the logo on a total of 60,000 shirts so far this year.