Of the 19 members of the first team squad, only five have ever faced Real Sociedad as Barça players, with eight of the squad never having played against the Basque team.

The big changes in the Barça squad over the last few years is evidenced in the fact that there are only five players left in the squad from the team that last played Real Sociedad in the 2006/07 season in which the Basque team were relegated - Valdés, Puyol, Xavi, Iniesta and Messi. 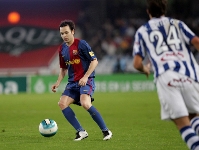 That game took place on May 5th 2007 at Anoeta in week 33 of the season, Barça led the title race and won that game 0-2 with goals from Iniesta (min 47) and Eto’o (min 88). In the corresponding game from the first half of the season, Barça won 1-0 thanks to a Ronaldinho goal in the last game before the World Club Cup and all five survivors also played that day, except for the injured Messi.

With Real not getting back into the top fligh till this season, there are eight players from the squad have never faced them: Abidal, Bojan, Jeffren, Mascherano, Keita, Busquets, Pedro and Maxwell.

Experience with other teams 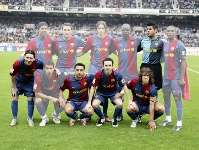 The squad member who has faced Real most times is Xavi Hernández, who’s played in 15 games and also scored twice –both in 2001.