Bojan all clear, Jeffren out on Sunday

Bojan all clear, Jeffren out on Sunday

Good news for FC Barcelona: neither of the two injuries sustained against Rubin Kazan by Bojan and Jeffren are serious. Bojan will be back training on Thursday and Jeffren will only miss one match.

Bojan spent the night under observation in Barcelona Hospital, but was released and told to get day’s rest, after which he can get back to normal training.

Meanwhile, tests this morning on Jeffren show that he has a groin strain. He will miss the weekend match with Real Sociedad but should be able to train again next week. 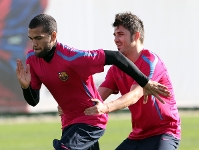 With Bojan and Jeffren out, as well as the also injured Milito, Josep Guardiola had 22 players at today’s training session, 16 from the first team and six from the reserves (Mińo, Bartra, Fontŕs, Thiago, Jonathan and Víctor Vázquez). As usual, the work was less intense for those that started the match against Rubin Kazan. 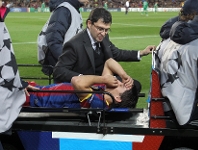 The team will not train again until Friday, when they are due to train at 11.00 at the Ciutat Esportiva. On Thursday, the first team will take a day off.