Pep Guardiola reflected on FC Barcelona's Champions League group stage campaign and admitted that he was pleased with the way his team has played and that they had finished on top of "a very hard group".

Barça had already clinched top spot before the last game of the first phase and they concluded in style with a 2-0 triumph on Tuesday evening with goals from Anreu Fontŕs and Víctor Vázquez. The chance to field a number of youngsters and shadow players pleased the coach. "I am pleased by the way that everyone has played and the spirit that they have shown," Guardiola said. 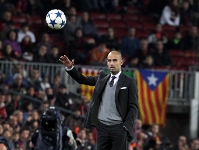 When the Blaugrana were drawn in their group Guardiola felt that it would be a tough test given that all the other sides came from northern Europe. "They are always difficult because they are at the top," he continued. "I am delighted with how things went in the group. We finished undefeated for the first time in three years and I think the team deserves a great deal of merit."

On the youth starlets that stepped up and performed at the highest level Guardiola was content. "They played well," he commented. "They have a great road ahead of them. The game was good to see how they would react and they did so with great seriousness. They all played at a very good level." 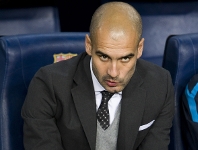 Vázquez came on early as a substitute and scored and that pleased the trainer. "I am happy for them all, but especially for Víctor," he said. After all his injuries the youngster has bounced back and Guardiola was particularly pleased. "He deserves his chance," he added.

Fontŕs netted the first goal and the coach stated: "He had an extraordinary second half and is a very intelligent player."

The draw for the next round of the Champions League takes place on December 17 and Guardiola has no preference as to which team Barça are drawn against. "Now they are all strong," he said. "When you pass the group stage there are no easy sides." 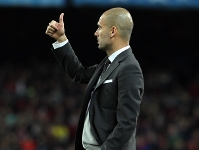 Josep Maria Bartomeu, the FC Barcelona vice president for the area of sport, expressed his happiness at the club seeing Andrés Iniesta, Xavi Hernández and Lionel Messi being the three finalists for the Ballon d'Or prize. "It is a reward for all the hardwork," he said, reflecting on the trio's rise through the Camp Nou youth ranks. "We have a new responsibility now and that is to continue to improve La Masia."