FC Barcelona head into the next stage of the Champions League after the team secured their best record in the group stages since Pep Guardiola took over as head coach.

The Blaugrana boss has seen his side improve their performance at this stage in each of his three seasons and this year they won 14 points after clinching 13 last term and 11 two seasons ago.

Barça are considered to be favourites to win the tournament and they are living up to that billing with performances on the pitch. Four wins and two draws, against Rubin and Copenhagen away, while maintaining a 100 per cent record at Camp Nou has been impressive.

Goals have come in abundance too with 14 scored and just three conceded. 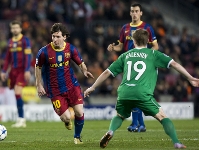 It is also the first time in three seasons that FC Barcelona have completed the group stage of the competition without losing any matches. In 2008/09 they were beaten by Shakhtar Donetsk at home, 2-3, and last term went down in Camp Nou against Rubin Kazan, 1-2.

Victory on Tuesday also marked Barça's first triumph against Rubin as they had lost one and drawn twice in their previous three meetings with the Russian league team. 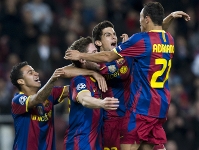 There are still eight more group games to be played in the Champions league on Wednesday, but Barça know several clubs that will join them in the draw next month. Possible rivals for Barça in the last 16 are reigning Champions Inter Milan, Olympique Lyonnais, Olympique Marseille and AC Milan. FC Copenhagen finished second in Barça's group therefore will avoid the blaugranes in next weeks draw, as will Valencia as they play in the same domestic League as Guardiola's side.