Barça play Rubin Kazan at the Nou Camp in the final Champions League Group D game on Tuesday. Sure, you knew that, but did you know.....?

- Barça come into the game with top spot assured, but Rubin need to do better than Copenhagen to get through to the next round, as the Danes lead them by a point.

- Rubin Kazan and Chelsea are the only teams who have faced Guardiola’s Barça and remain unbeaten. 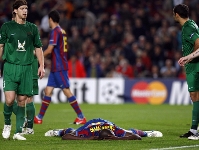 - Rubin pulled off one of the biggest surprises of last year when they beat Barça 1-2 at the Nou Camp, a defeat which didn’t stop Barça from finishing top of the group though.

- That win remains the only time Rubin have won on the road in the Champions League.

- This could be the first time under Guardiola that the team finish the group stage unbeaten.

- Messi is Barça’s leading goal scorer in the Champions League with a total of 31 goals in 49 games.

-Messi has also had the second highest number of shots in the competition this season (13). 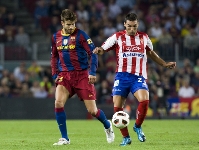 - Piqué is the only Barça player under threat of suspension, whilst Pinto is again available after his two game ban. For Rubin, Kaleshin has seen two yellows so far.

- Barça are the team with the highest average possession -70 %, followed by Bayern with 63%.

- Rubin Kazan’s star signing Carlos Eduardo, has met up with Dani Alves in the Brazilian squad.

- The Russian league finished on November 28th with Rubin third after a goalless draw in their final game with Lokomotiv Moscow, to maintain their unbeaten run of games in the second half of the season. 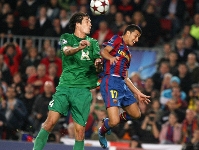 Swedish ref Jonas Eriksson, 36, has been in charge of 5 Champions League games in his career, but never in games involving Barça or Rubin.