Leo Messi, Xavi Hernández and Andrés Iniesta all have the Barça DNA firmly stamped on their footballing characters. They all joined Barça as children and have reached the top of the football world at the club of their lives.

The Barça team who won the six titles and last year’s 99 point league and which continues to dazzle the world with its precise football, cannot be understood without looking at Leo Messi, Xavi Hernŕndez and Andrés Iniesta. Barça’s style, admired all over the world, is all about attack and possession and it would be hard to find players who have better internalised that philosophy than these three Barça youth team products. 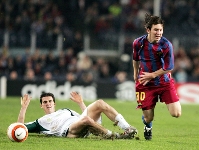 Messi came to Catalonia from his native Argentina in 2000 when he was just 13. His silky left foot soon took him through the various youth teams before making his official debut in October 2004 under Frank Rijkaard. He won himself a regular place the following season, although injury kept him out of the end of the campaign. Despite his tender years, he was second in the 2007 and 2008 FIFA World Player of the Year Awards and after leading Barça through their fantastic 2009 season he was finally voted Player of the Year, as well as winning the Balon de Oro.

Messi’s goal scoring ability, he is the current Golden Boot holder, has increased with his development as a top flight player and as well as having superb technical ability, he has shown himself to be especially lethal in quick passing movements with his teammates - something so typical of Barça’s football. Used by Guardiola as a winger and as a deep lying forward, he’s unstoppable in one on one situations and is obsessed with scoring and making goals. At 23, he is the fifth highest scorer in the Club’s history and its leading international scorer. 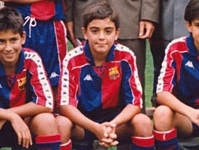 Xavi signed up with Barça in 1991 when he was just 11 years old. Seven years later, thanks to a meteoric rise through the club’s youth teams he made his first team debut under Louis Van Gaal. Since then he has won the confidence of every coach who’s come to the club, first as a deep lying midfielder and then as a more attacking distributor. Xavi is a great reader of the game and knows how to impose his rhythm with his great vision and precise passing. Xavi has become an extension of boss Pep on the pitch and almost all of Barça’s play goes through him.

He is currently the team’s second captain and is closing in on Migueli’s all time appearance record for the Club. 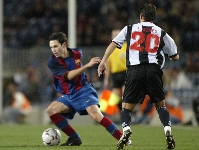 Andrés Iniesta came to the Masia in 1996 when he was 12 years old after impressing in the Brunete Tournament with Albacete. He was always marked out as something special and he made his debut in October 2002, when Van Gaal was again in charge. Like Xavi, he began as a playmaker, but he has developed great versatility over the years and Guardiola uses him out wide as well as in the middle and even in the hole behind the strikers.

Decisive at the World Cup

Iniesta has become much more of an attacking force. He beats a man with uncommon grace and has proved himself a scorer of vital goals such as the Champions League semi final winner at Stamford Bridge in 2009, or last summer’s World Cup winning strike against Holland for Spain. Both Xavi and Iniesta were decisive in that tournament, just as they had been in the European Championships won two years earlier.