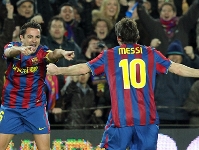 Xavi Hernandez is Baršaĺs and Spainĺs man in charge on the pitch, dictating the game with his brilliant passing and possession. Itĺs been a great year for the Catalan and below are some of the highlights.

13 January: The IFFHS names Xavi as the best midfield playmaker in the world for 2009.

13 January: A few hours later, a brilliant strike from Xavi wasn’t quite enough to avoid Barša being knocked out of the Spanish up by Seville.

23 January: Scores the opening goal in the 0-3 win over Valladolid.

6 February: Xavi scores again, this time in the 2-1 win over Getafe after the team had played with 10 men for more than half of the game.

15 February: Suffers a muscle injury in his right leg.

23 February: Xavi is back for the 1-1 draw in the first leg of the game against Stuttgart in the Champions League.

25 February: The Ajuntament de Terrassa, Xavi’s hometown Council, awards him the Medal of Honour of the City.

14 March: With the 3-0 win against Valencia, Xavi equals Migueli’s record of wins with the team -195- whilst playing 49 fewer games.

17 March: Xavi suffers another muscle injury and misses the second leg against Stuttgart(4-0)

31 March: Xavi leads the team in one of their best performances of the season, the 2-2 draw with Arsenal, setting up Ibra’s second goal.

10 April: Another exhibition at the Bernabeu where he sets up both Barša’s goals from Pedro and Messi in the 0-2 win.

17 April: Plays in his 10th derby game in the goalless draw at CornellÓ-El Prat .

1 May: A brilliant free kick gives Barša their second goal in the 1-4 defeat of Villarreal and marks a massive step towards retaining the league title.

8 May: Xavi sees his fifth yellow in the 2-3 win at Seville and is suspended for the final league game against Valladolid.
16 May: The win in the final game gives Xavi his fifth league title – only Ramallets and Guardiola, with six, have won more.

20 May: Vicente del Bosque names him in the Spain squad for South Africa.

9 June: Barša and Xavi agree a contract extension until 2014 and possibly 2016. “I want to retire here”, he declares.

25 June: Xavi leads Spain to 2-1 win over Chile to seal place in the knock out stages.

29 June: A lovely ball to Villa sets up the Spain striker for the only goal on the win over Portugal. Xavi is voted man of the match by FIFA.

3 July: Spain get through to the semis by beating Paraguay 1-0.

7 July: Xavi sends over the corner that Puyol heads home to book a place in the World Cup Final. The goal is a carbon copy of the 1-2 at the Bernabeu in the 2-6 win. Is again voted man of the match.

12 August: With his summer holidays over, Xavi joins up with the squad for pre-season training.

16 August: Together with ValdÚs, PiquÚ and Messi, he is named as one of the 12 players selected for the UEFA awards.

18 August: Marks 12 years since his debut with the first team against Mallorca.

21 August: Makes his season debut by winning another title, the Spanish Super Cup, as the team come back from a 3-1 first leg defeat to beat Seville 4-0 at the Nou Camp.

1 October: Suffers an Achilles tendon injury which keeps him out of the next few games.

5 October: Wins the first edition of the Catalan Sports Prize.

16 October: A brilliant one-two with Iniesta equalises in the 2-1 win over Valencia.

22 October: Xavi misses the game in Zaragoza and is the club’s representative in picking up the Premio PrÝncepes d’Ast˙ries as part of the Spain team.

29 November: Scores the opening goal and dictates play throughout in Barša’s 5-0 thrashing of Real Madrid.

6 December: Xavi is named as one of the three candidates for the FIFA Pilota d’Or.