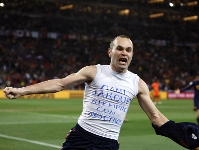 Iniesta’s story is one of a player who never gives up. Despite an injury marred 2010, Iniesta came into the South African World Cup in top form and his winning goal and celebration just showed what an honest player he is.

1 January: Iniesta is given the medical all clear after picking up an injury in the final of the World Club Cup on December 16th 2009.

19 January: Sets a record of 17 months without losing with Barēa whenever he is in the team.

20 February: Gets his first goal of the season in his 300th game for the club, as Barēa run out 400 winners over Racing.

27 March: During the 0-1 win over Mallorca, Iniesta suffers a small tear in his right thigh.

5 April: Again given the all clear to play by club doctors.

16 May: Iniesta re-appears as Barēa lift their 20th La Liga title with a 4-0 win over Valladolid.

20 May: Vicente del Bosque names him in the Spanish squad for South Africa.

8 June: Suffers another muscle strain during the friendly between Spain and Poland, but is passed fit for the start of the World Cup.

16 June: Swiss full back Lichtsteiner hits him with a bad tackle that sees him limp off a Spain go down 0-1.

25 June: Iniesta hits top form as he and Villa both score in the 1-2 win over Chile that sees Spain through to the knock out stage.

29 June: Iniesta, Xavi and Villa combine for the only goal against Portugal that send s Spain into the quarter finals.

3 July: Once again sets up the winning goal on the win against Paraguay.

11 July: Iniesta’s greatest moment as he scores the winner to bring the World Cup back to Spain with an injury time strike. His celebration involves showing his T-shirt on which is written a dedication to the much missed Espanyol captain Dani Jarque - ‘Dani Jarque, siempre con nosotros’.

12 July: Spanish President José Luis Rodrķguez Zapatero pays special praise to Iniesta before the team begin their celebratory parade through the streets of Madrid: “if the captain and the rest of the players will let me, I’d like to especially congratulate a person who represents like nobody else, the essence of good football and human quality. There is no better reference point for us than Iniesta. Thank you Andres for remembering Dani on such an unforgettable day”.

9 August: Iniesta, the only World Cup winner not called up for Spain’s friendly with Mexico, begins the pre-season with Barēa, after just 29 days of holiday.

21 August: Plays his first game of the 2010/11 season, as the team come back from their first
leg defeat to beat Seville 4-0 in the second leg to take the Spanish Super Cup.

29 August: First league game and first goal of the season for Iniesta as he makes it 0-2 with a great goal in the 0-3 win against Racing Santander.

16 October: Another goal starts the comeback against Valencia (2-1).

11 November: Four months after his goal, Iniesta presents his T-shirt with his message to Dani Jarque to Espanyol in a wonderful gesture of solidarity.

20 November: Iniesta gets the second goal in Barēa’s 0-8 win over Almeria. When Iniesta is free from injuries, nobody can stop him!

29 November: He sets up Xavi for Barēa’s opening in the demolition of Real Madrid.

6 December: Iniesta is named amongst the three candidates for the FIFA Pilota d’Or. So far, he has played in every league game of the season.