“We have been victims”

“We have been victims”

Josep Guardiola took advantage of his post match press conference to explain his version of events on Saturday that saw the team arrive just before kickoff: “I don’t decide when we play. We have been victims of the situation”.

Josep Guardiola hardly spoke about football, centring his intervention on the events of the day. The boss explained: “if we had known on Friday that the planes wouldn’t be flying, then we would have arranged to come here by train and plane as we did, but the information we got from AENA and the RFEF was that the airport would be open on Saturday at 11.00 and then at 12.00”.

“We were told that the game would be suspended if we were unable to travel. We waited and then finally after all the pressure they got, they told us we would lose the three points if we didn’t play today. We were in contact all the time with the RFEF and we have been victims of the situation”.

“We will continue to travel on match day” 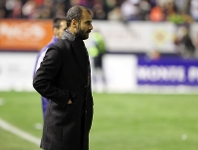 Asked if the events would make him change his regular plan of travelling on match day, Guardiola replied: “we will continue to travel on the day of the game. More than 300.000 people, like us, have been affected by the strike. These were exceptional circumstances and that was why the RFEF said the game could be postponed if we were unable to travel by plane”.

Guardiola also explained that Barça had always preferred to play the game on Saturday and not on Sunday as had been suggested at various moments during the day: “it was better for us today because that gives us the time to prepare for the game against Rubin Kazin”.

Praise for the players

Claiming the players had played: “as well as ever”, Guardiola also praised the team’s “behaviour and attitude” in the “uncomfortable” atmosphere at the ground where the local fans expressed their anger at the day’s events: “I feel bad for our supporters and the Osasuna fans. It was not our intention, we always try and separate ourselves from this type of controversy”. 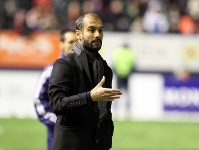 Josep Guardiola admitted that his team talk before the game was hardly about football at all: “I took the opportunity to explain to the players what had happened yesterday and today. That’s what we talked about in the 10 minutes before the game”.