FC Barcelona have six players named in the 60-strong list for the public to vote on for the uefa.com team of the year 2010 with Carles Puyol, Gerard Piqué, Xavi Hernįndez, Andrés Iniesta, David Villa and Lionel Messi included.

There are five nominees for each of the 11 places in the team and the Blaugrana could see over half of the winning selection come from their ranks after half a dozen of their stars were put up by the official website of European football's governing body,.

All the players were chosen by uefa.com's team of journalists, who report on all aspects of European football on a daily basis.

Barēa's six players are well distributed as Piqué and Puyol are up for either or both of the central defensive positions, Xavi is one of five stars vying for the centre of midfield, Iniesta is up for the left-sided midfield role while two of the ten nominations for the two forward positions are Villa and Messi. The decision will be announced on January 19, 2011. 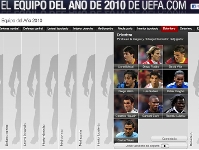 By clicking here , you can vote for your favourite 11 players of the past year.. The winning team and coach will be announced on January 19, 2011.