Guardiola: “the game against Osasuna is a good test”

Guardiola: “the game against Osasuna is a good test”

Josep Guardiola believes the game against Osasuna will be “a good test for us”. He also reckons that the team must put Monday’s win behind them and warned that Madrid would now be more dangerous than ever.

“Osasuna will put us in our place” according to the boss, who made a point of cutting any euphoria on the back of the win against Madrid: “we are happy with the 5-0 win, but that’s it. Osasuna have shown that from the first minute you have to do everything really well and keep taking the points if you want to win the league. I’m optimistic after watching the team train this week, but you never know what might happen”.

Guardiola continued: “ the will be a good test that could show us if we are ready to compete for the league after such a special win as Monday’s”. 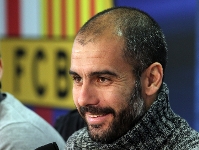 Intensity and keeping to their trademark style are the two key factors for Barça if they are to take the three points away from Pamplona: “I’m sure it won’t be a game like we had against Madrid, but we have to show the same intensity that they will and also not lose our identity, lose who we really are. It’ll be a tough game against a very experienced team with a brave and ambitious coach”.

During this lunchtime’s press conference, Guardiola also touched on Real Madrid, warning that the defeat they suffered on Monday could make them tougher opponents: “they are doubly dangerous now. They have always shown that they have a great capacity to bounce back and they have a manager who generates a competitive attitude. I’m sure they will be even more dangerous for the rest of the season”.

Guardiola confirmed that Messi is fit to play in Pamplona despite the knock he picked up and he was also upbeat about Xavi’s recovery from his Achilles tendon problem: “it’s a good sign that none of you have asked about Xavi in the last few weeks. He’s a lot better, even though he still gets a few twinges. He’s putting up with it fine and it’s a good sign that he’s playing regularly”. 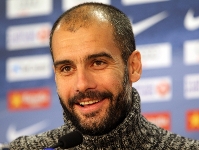 Can the model work in Italy?

Asked by an Italian reporter if the Barça model could be implanted in Italy, Guardiola answered: “first you have to have coaches with enough personality and strength to take the pressure, like Cruyff or Rexach did at Barça. Then you need a board of directors who have the patience to view things in the long or medium term, rather than just in term of immediate results. It’s a long process and we are lucky at Barça that it’s already implanted and we just have to fight to maintain it”.