Messi in squad for Osasuna game

Messi in squad for Osasuna game

Leo Messi will travel with the rest of the 19-man squad to Pamplona for tomorrow evening’s game against Osasuna. 18 first team players plus B team youngster Thiago have been called up by Guardiola. 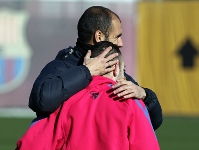 The squad had a training session this morning and it was announced that Leo Messi would finally make the trip to Pamplona after the Argentinean trained with the rest of the group. Messi had sat out the last few sessions after picking up a knock in the win against Madrid . B team youngster Thiago is also included in the 19 man squad for the game which kicks off at 20.00 on Saturday evening.

Milito again in the gym

Gaby Milito will not be facing Osasuna though, as despite training on Thursday, he stayed in the gym this morning and is not yet fully recovered from the injury he picked up against Ceuta . 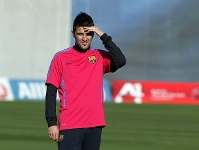 This morning’s session began with congratulations for David Villa , whose 29th birthday it is today. The rest of the squad greeted him with a round of applause before they got down to work with some ball control and possession exercises.

Flight to Pamplona on Saturday

The squad will travel to Pamplona on Saturday morning, leaving the Nou Camp at 9.45 for El Prat where they will catch a direct flight to the Navarra capital. 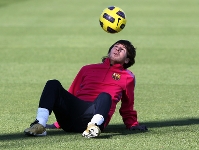