Osasuna have made the Reyno de Navarra Stadium a very tough place to visit this year and Camacho’s team are one of just four teams in La Liga to remain unbeaten at home this season.

Following the euphoria of Monday night , Barça have to come back to earth and take on the difficult trip to Osasuna, who have won four and drawn two of their six games in Pamplona this season. It’s never an easy ground to win on and Barça’s record over the last 10 years shows what a fight the Basques put up on their home turf.

Sporting de Gijón, Hercules, Malaga and Real Sociedad have all been beaten at the old Sadar Stadium by Camacho’s team’s blend of passion, strength and commitment in front of a noisy home crowd that has seen them score 11 goals in six home games, conceding just two so far this campaign.

Malaga and Hercules suffered most, going down 3-0, whilst Real Sociedad went down 3-1, despite going ahead through a Raul Tamudo goal. Osasuna’s last home game ended with a 1-0 win against Sporting. 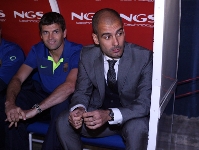 Curiously enough, two of the teams who are struggling in the bottom half are the only ones to take anything away from Pamplona this season – Almeria shared a goalless opener to the season and Llevent drew 1-1 in week six.

Osasuna are also not dependent on a single goal scorer, with their 12 goals coming from eight different players: Aranda, Pandiani, Masoud and Nekounam, have each scored twice, whilst Camuńas, Lolo, Monreal and Vadocz have scored the others. 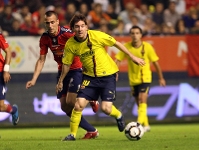 Poor form on the road

Away from home it’s been a different story for Camacho’s team, with just one point and a single goal, with 12 conceded, from seven games. In their defence however, Osasuna have already made trips to Real Madrid, Bilbao, Espanyol and Atletico Madrid.