Barça under Guardiola have been scoring more and more goals each year. In 2010 they have already scored 100 league goals, while 2009 produced 93.

After the clásico, Xavi Hernŕndez claimed his side is playing even better this year. The goalscoring statistics suggest he is right. 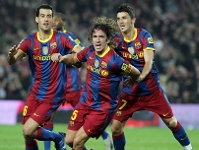 Looking at calendar years rather than seasons, Barça have already hit their century in 2010. In what amount to 36 league matches, that means an average of 2.77 goals a game. Just counting goals this season, they have an average of 2.92 goals, especially thanks to some big wins in recent outings.

While hitting 100 goals, the side has only let in 23. So, it’s not just in attacks that Guardiola’s side is impressing. They’ve only conceded 0.63 goals a game in 2010 league matches.

Guardiola’s first full year at the club produced 6 titles, including the league championship, and they made good headway towards the second. But they didn’t score as many goals as they have this year. In 2009, the Blaugrana managed 93 goals in 36 games, which was nevertheless one mighty haul. 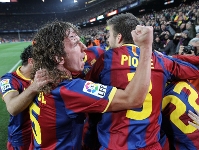 FC Barcelona have been simply astounding of late. In their last five games, they have scored 3 against Vila-Real and Getafe, four against Sevilla, eight against Almeria and five more against Real Madrid. That means that in five consecutive Liga fixtures, they have averaged an astonishing 4.8 goals per game.