Guardiola: “Espanyol put us in our place”

Pep Guardiola believes that FC Barcelona came back down to earth slightly on Wednesday evening after they were unable to win the Copa Catalunya in a triangular tournament after being beaten by Espanyol in the first match.

The Blaugrana participated in the three-team final playing 45 minute games against the Blanc i Blau and Hospitalet and the coach thinks it was a good lesson before their next league game versus Osasuna "Thedefeat by Espanyol showed us what we will come up against in Pamplona, then Real Sociedad and in Cornellŕ," Guardiola explained. "Espanyol have put us in our place and now we have some tough games ahead before Christmas."

Victory in the second game against Hospitalet was not enough to give the trophy to Barça as Espanyol won it thanks to their two wins. "The Real Madrid game is now history," Guardiola continued. "We now have to start thinking about Saturday."

Barça fielded a mixture of players that did not start against Madrid and B team starlets in the Copa Catalunya. "The (Catalan) Federation deserves to see Barça send a first choice side but having played on Monday they could not do so again on Wednesday," the Blaugrana boss commented.

Guardiola then reflected on the two teams that Barça played and Espanyol's triumph. "The trophy is well deserved," he said. "Espanyol are a grand team. They are one of the best teams in the league."

"The game against Hospitalet was strange because within five minutes we scored twice, but then they went on and played well. I hope that they can have a good season." 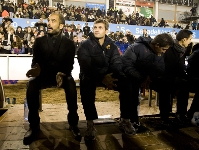