As has become wonderfully common in recent times, the world was enchanted by Barēa’s incredible win against Real Madrid.

Not only did the 5-0 result have a massive impact on the Catalan and Spanish press, where it made the headlines left, right and centre, but all around the planet the world’s media was stunned by such a convincing display in the clįsico. 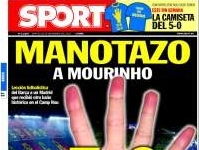 It goes without saying that the Barcelona papers had news of the victory emblazoned on their covers. ‘Sport’ led with the headline “Slap in the face for Mourinho. Rout, humiliation and leaders”. ‘Mundo Deportivo’ simple went for ‘5-0’, the result of the incredible win against the all-whites. ‘El 9 Esportiu’ went for the header “And without abusing”. 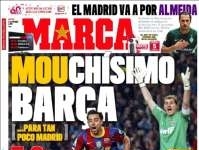 ‘Marca’ and ‘As’, published in Madrid, had no option but to accept FC Barcelona’s superiority. ‘Marca’ went for “Mouchķsimo Barēa”, a play on the Spanish word for ‘much’ and the name of the defeated manager, while ‘As’ said “Thrashed and driven mad”.

Humiliation for Madrid in national papers 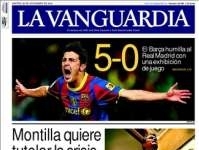 The general interest newspapers also featured Barēa v Madrid on its front pages. In Catalonia, ‘El Periódico de Catalunya’ was titled “Reality bath”, ‘La Vanguardia’ stated that “Barēa humiliates Real Madrid with an exhibition of football”, and ‘Avui’ filled its front page with ‘5-0’. ‘Ara’, which came out for the first time on Sunday, also included Barēa v Madrid by asking “And now what?”.

From Portugal to Argentina 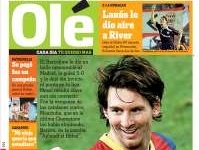 But there was also an extraordinary amount of coverage in the international press. ‘Jornal do Notķcias’, in Portugal, went for the self-explanatory “Real humilhaēćo”; ‘L’Équipe’ in France made it the main headline, proclaiming “Barcelonesque”, and ‘Corriere dello Sport’ spoke of “Barēa scream. Real Mouto!” (a play on the Italian for ‘mute’. On the other side of the Atlantic, Argentina’s ‘Clarķn’ (“Barcelona dance and rout in the clįsico”) and ‘Olé’ (“Mourirte de risa” (die laughing, again playing with the name of the Madrid coach) were just two of the papers that praised the job done by Guardiola and his men. 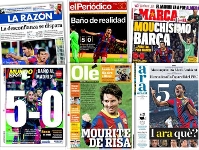