5-0 win over Madrid in numbers

5-0 win over Madrid in numbers

Barça’s exhibition against the old enemy produced a number of interesting facts, especially relating to their absolute domination of possession.

- Messi ended his run of goals in ten consecutive games. But both Villa’s goals came from sublimely brilliant Messi assists.

- The Argentinian took players on 16 times, and this paid off 9 times.

- Guardiola has won all five of his clásicos as a coach. In these games, Barça have scored 16 goals and conceded just 2.

- Mourinho has yet to win at the Camp Nou and Cristiano Ronaldo has never scored against Barça.

- With 11 wins, 1 draw and 1 defeat, Guardiola’s side has made the best ever Barça start to a league campaign. 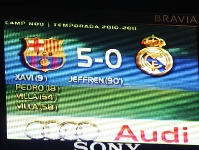 Despite the rain, the Camp Nou attendance was 98,255, the best of the season, with a spectacular and colourful mosaic included.