Fourth 5-0 win over the eternal rival

Fourth 5-0 win over the eternal rival

Nearly 17 years after Cruyff’s team’s 5-0, Barça have done it again. Guardiola’s men, who beat Madrid 2-6 on that wonderful night a year and a half ago, tonight equalled the Dream Team’s fantastic win as they surged towards the fourth successive league title of the Cruyff/Rexach era. 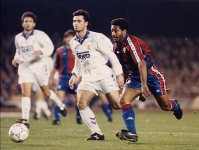 Xavi, Pedro, Villa (2) and Jeffren have entered into Club history alongside the scorers on that wonderful 8th January 1994 - Romario (3), Koeman and Ivan Iglesias. The wonderful mosaic at the Nou Camp, Romario’s spectacular dribbling for the first goal and the ecstatic reaction of Cruyff’s assistant Tony Bruins Slot from that night will always stay in the memory and the link between them? Pep Guardiola who was the mastermind on the pitch for that win and again from the bench for tonight’s.

The other two 5-0 results were way back in the early part of the 20th century. In 1935 Ventolrŕ (4) and Escolŕ were the scorers, whilst ten years later, Barça’s five cup winning team in the making did it again with goals from César (2), Bravo, Escolŕ and Gonzalvo III.. 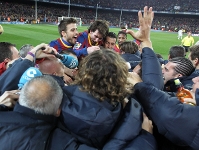 In addition to the 5-0 wins at the Nou Camp, Barça have also celebrated the same score at the Bernabeu. That result came on a memorable day in the 1973-74 season when Rinus Michel’s team led by Johan Cruyff in all his pomp took a massive step to the League title the club had so desperately been waiting for with another great exhibition of football. Asensi (2), Cruyf, Juan Carlos and Sotil were the scorers on that occasion.