Panathinaikos vs FCB: did you know...

Panathinaikos vs FCB: did you know...

There are plenty of curiosities attached to third encounter history has produced between Panathinaikos and Barça, and here are some of the best.

► Barça have never won away to Panathinaikos. They lost in the quarter finals of the Champions League in 2001/02 and drew in the group stages of 05/06.

► In neither of those games, which ended 1-0 and 0-0, did Barça get an away goal at Panathinaikos.

► Luis García scored that night against Panionios, and now he’s playing for Panathinaikos.

► Barcelona first visited Greece in 1976, in the first round of the UEFA Cup. PAOK Salonika won 1-0.

► Panathinaikos have a new manager after Nikos Nioplais was sacked on November 15. They are now managed by Portugal’s Jesualdo Ferreira, who started the season at Malaga. 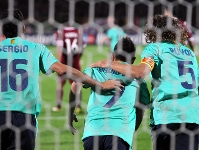 Barça have only lost one of their last fourteen away games in Europe.

► Several meetings of old friends tonight … Sebastián Leto and Javier Mascherano played together at Liverpool in 2007/08, and Sidney Govou and Éric Abidal were team mates at Olympique Lyon from 2004 to 2007.

► And Alves and Adriano know Gilberto from the Brazilian national team, Cissé, Govou, Boumsong and Abidal from the French one, and Kanté and Keita play together for Mali.

► Messi is the second highest goalscorer in the Champions League so far. Only Eto’o has more, with seven.

► Karagounis misses the game through suspension after being carded against Shakhtar. Barça’s only suspended player is Pinto. 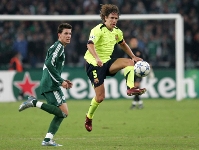 The man in the middle will be Italy’s Gianluca Rocchi. This is his third Champions League match.