Fontąs: "The result was incredible"

Fontąs: "The result was incredible"

Andreu Fontąs played his first game at the highest level for FC Barcelona as a starter on Saturday evening and could not hide his delight after helping the team to a mammoth victory against Almerķa.

The homegrown defender wore number 26 as he linked up alongside Carles Puyol in the Blaugrana back four and performed like a seasoned pro as he made nine clean tackles and won the ball back on eight occasions during the historic 0-8 win. Fontąs played the entire 90 minutes and his statistics were impressive.

Being involved in 46 moves, Fontįs also completed 76 of his 81 passes and his tackling and aerial ability saw him ensure that Almerķa were hardly able to test Vķctor Valdés in the Estadio de los Juegos Mediterrįneos and he also had an assist having helped Pedro in his goal. 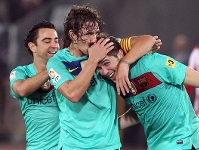 "I am incredibly happy at playing my first game in the starting team and also because the result was incredible," Fontąs explained. "The other players helped me so much. At half time (Pep) Guardiola told us that we could not relax even though the scoreline was already huge. That meant that we carried on working for more."

Fontąs already had first team experience as a substitute having replaced Gerard Piqué during the 3-0 at Sporting de Gijón last season. He also appeared in the Copa del Rey tie against Ceuta this term in the away leg when he played alongside fellow B team starlet Marc Bartra.


Below is what some of the players had to say: 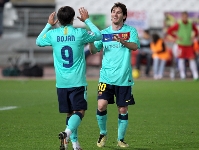 "I am happy with my goals and with the general display of the team."

"It is an unusual sort of game where you are left wondering if you have played very well or they have done very badly. We took every opportunity we had."

"We knew that this was the most important game and we have fulfilled that so now we go to Greece and think about the Madrid game afterwards." 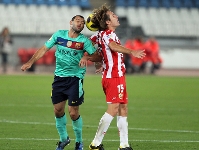 "I am pleased with the win because beyond the result we knew that it would not be an easy game as the last few times the team has been here it was tough. Today we were able to win and go home happy."

"More than anything I am pleased with the collective display. I think that whole team has played well and it is because of that the result was how it was. Personally I just keep adding more minutes."

"The key to the high score was the ambition of the team, with respect to the opposition, because at half-time it was 0-5 and we continued playing well and being at our best."

"I once played in a game with a similar scoreline for Liverpool at Anfield against Besiktas. These games do not happen often. The team played very well." 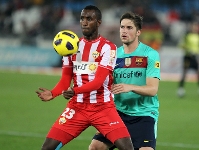 On Monday, next training

The FC Barcelona first team will not train again until Monday when the players will work in the Ciutat Esportiva Joan Gamper from 11:00. Bojan Krkic will speak to the press afterwards.