FC Barcelona can enjoy a toast on Friday as November 19 marks the fifth anniversary of the stunning 0-3 win against Real Madrid in the Santiago Bernabéu during the 2005/06 season when Ronaldinho was applauded by the home fans.

When one thinks of historic games in the Blaugrana's history that win on November 19, 2005 will be among them as Frank Rijkaard's team visited the Spanish capital for the 12th league game of the season and were just one point behind their hosts. Surprisingly, Osasuna were on top of the table with the sides involved in el Clásico lying in second and third places.

Barça needed just 14 minutes to take the lead in the Bernabéu as Samuel Eto'o turned on the edge of the area and toe-poked the ball past a stationary Iker Casillas in the Madrid goal. The Cameroon striker and Lionel Messi came close to adding a second before the break, but the game would be won in the second period.

Ronaldinho took centre stage in the next 45 minutes as the Brazilian produced one of the most dazzling displays in a Blaugrana shirt. In the 59th minute he slalomed down the left of the pitch leaving Sergio Ramos and Iván Helguera in his wake before clipping the ball past Casillas. Ronaldinho's next goal, 20 minutes later, would bring the Bernabéu to its feet in admiration as his skill and ingenuity saw him make it 0-3 and put the Catalan side on top of the table. Barça did not look back and went on to win the title.

Since then both Barça and Real Madrid have seen great changes to their playing staff as from the home team that coach Wanderlei Luxemburgo named only Casillas and Sergio Ramos remain. Víctor Valdés, Carles Puyol, Xavi and Messi all started the game that day while Andrés Iniesta came off the bench and all five are still key members of the squad at Camp Nou. 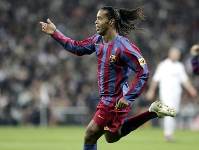 The win in the Bernabéu five seasons ago was the third time that Barça had won 0-3 at Real Madrid. The first came in the 1984/85 season when Terry Venables' side went on to win the league.