The first team squad trained this afternoon with all 13 internationals who were on duty midweek back at the Ciutat Esportiva under Guardiola’s orders and with Jeffren Suárez now fully recovered.

There were just five players in training on Tuesday and Wednesday -Pinto, Maxwell, Bojan, Keita and Jeffren- but the rest of the squad were back from their international commitments today as the boss put them through their paces ahead of Saturday’s trip to Almeria. It was quite a gentle session for the internationals, with some typical ball control exercises in the first quarter of an hour open to the media.

Youth and B team players

The 17 first team squad players were joined by B team players Andreu Fontŕs and Thiago Alcántara, who’ve been with the squad all week, as well as Rafa Alcántara and Javi Espinosa from the youth team.

Piqué expected to be fit for Friday

Gerard Piqué worked apart from the rest of the group after doctors had taken a look at the twinge he felt in Spain’s defeat to Portugal on Wednesday, but he is expected to train normally on Friday.

Good news for the boss was the medical thumbs up given to Jeffren Suárez, who’s been out with a back problem since the first leg of the Cup tie with Ceuta three weeks ago. For his part, Gaby Milito continues to receive treatment on his calf injury. 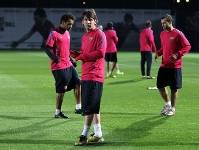 Back in the morning

The squad will be back in the morning at 11.00 for the final session ahead of Saturday’s trip to Almeria. Josep Guardiola will give a press conference after training.