This lunchtime’s Cup draw has thrown together Barça (25) and Bilbao Athletic (23) -the Kings of the Spanish Cup, with 48 titles between the two of them.

Naturally enough, the two Copa del Rey Kings have met plenty of times in the competition and it’s Barça who have the better head to head record, coming out on top 12 times against Bilbao’s six.

It’s actually been 21 years since the two met in a two legged tie: in the 1989/90 season they also met in the last 16, with Barça winning both legs 1-0 to get through to the next round and go on and win the competition.

The most recent meeting between the two was in the final of the 2008/09 competition in Valencia when Guardiola’s team claimed the first of their eight titles with a convincing 1-4 win. 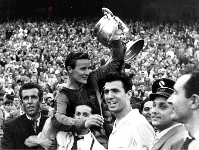 Stats on Barça’s side