Barça have once again trained without the international stars, but everybody should be back together for the session that Josep Guardiola has called for late Thursday afternoon.

The venue on Wednesday was pitch number 7 at the Ciutat Esportiva Joan Gamper and like on Tuesday only five players were not away on international duty. These were Pinto, Maxwell, Bojan, Keita and Jeffren. Things will be back to normal tomorrow, when the coaches would like to start focusing on Saturday’s league match away to Almeria.

Yesterday’s number of six Barça B players was raised today to eight. Thiago, Fontŕs, Benja and Planas were back, this time joined by youth team keeper Rochina and reserve players Masip, Edu Oriol and Abraham.

Though still out since being injured against Ceuta, Jeffren seemed able to train perfectly normally today. But Gaby Milito stayed in the locker rooms for treatment on the femoral biceps in his right leg.

After the usual warm ups the players divided into three groups to work on an exercise to develop ball retention skills. 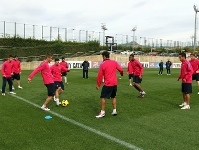 The first team will next train on Thursday at 18.00 at the Ciutat Esportiva Joan Gamper. In principle, Josep Guardiola will have all of his internationals back for that.