Spanish League Round Up Week 11

Spanish League Round Up Week 11

Madrid needed a late goal in Gijon to hold onto top spot in La Liga, whilst Seville also profited from a last minute strike against Zaragoza to move into fifth with Valencia reigniting their challenge with their first win a month at home to Getafe.

Espanyol’s goalless draw at Racing meant they dropped out of the top four, whilst at the bottom, Malaga recorded their first league win under Pellegrini to send Levante into the bottom three and Soldado’s late goal for Seville sent Zaragoza to the foot of the table with Almeria, who are due to entertain Barça next week, making up the relegation spots.

There was a tense atmosphere in Gijon for Madrid’s visit on Sunday following Mourinho’s remarks about the hosts and the home team fought well to keep the leaders out, only to fall to an 82nd minute strike from Higuain. Madrid had Casillas to thank too though as the Spanish keeper made a great late save to turn away a header from Sporting sub Barral. Valencia moved back into the top four with their first league win since October 2nd, beating Getafe 2-0 with goals from Tino Costa and David Navarro, whilst Seville are level on points in fifth after their dramatic win in Zaragoza. Luis Fabiano put Seville one up in the first half before Beloti equalised for Zaragoza and it looked although Gay’s team might make it three games on the run unbeaten when Fernando Navarro was shown red on 72 minutes, but a mistake from Jarosik let in Negredo on 91 minutes to give the visitors the points.

Espanyol continue to find goals hard to come by and they had keeper Kameni, who saved a first half penalty, to thank for the point they took in a goalless draw in Santander – the fourth time in five away games that Pochetinno’s team have failed to score. The point keeps Espanyol in the top six on 19 points, two ahead of Atletico Madrid who saw off Osasuna on Saturday with Forlan back on the score sheet with a brace in the 3-0 win.

Bilbao hold out with 9

Basque neighbours Bilbao and Real Sociedad are below Atletico after two exciting games. Bilbao beat Almeria 1-0 in the San Mames despite being reduced to 9 men with Koikili and Castillo both seeing red. Llorente inevitably got the goal -his eighth of the season. Real were less fortunate, coming out 2-1 losers at Hercules despite taking an early lead, Trezeguet, with his sixth of the campaign, and Drenthe pulled the game round for Hercules to record their second home win of the year. 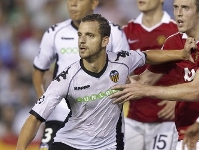 Deportivo took a point from their trip to Mallorca –another goalless draw, their fifth of the season.- to make it 7 games on the run without a defeat, a good record as they go into three games against fellow strugglers Malaga, Racing and Hercules.