Carles Puyol played his 500th game for the club on Saturday against Villarreal and showed that at 32 he is still well on top of his game. Speaking to Barńa TV he joked after the game: ōIÆm still only half way through my careerö.

Speaking to the club TV programme “El Marcador”. Puyol reckoned he’d reached the 500 mark at a sweet moment in his career, a career which he’s not given any thought to bringing to an end just yet: “I’m just concentrating on right now –not on how many games more I’ll play, nor how much longer I’m going to keep on playing. I’m just trying to improve every day and enjoy this game. I’m very proud to be able to play in this team”. 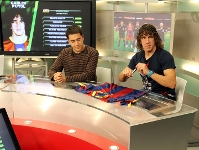 Carles Puyol also revealed what he thought was the secret to his longevity: “keeping up the excitement, coaches who have confidence in you, not having too many bad injuries and above all, playing in a team like ours”. 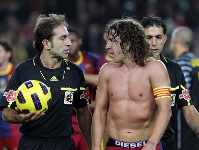 It’s no easy thing to reach 500 games for Barńa and Puyol has joined a pretty exclusive club, but he reckons there are plenty of players in the team who could make that number of appearances: “there are a lot of players who I think will get there –Valdes is close, Iniesta is bound to get there and then younger players like Leo, Sergio or Gerard Piquķ will do it too”.

“We knew it would be tough” 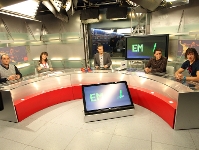 Commenting on the win over Villarreal, Puyol insisted: “we knew it would be a tough game. They are a good team and they play good football. The fact that they were high up the table just gave them more confidence in themselves and we knew it would be hard to beat them. The last few years we’ve always had difficult games against them, they are a team who bring the ball out intelligently when they have the ball and it’s complicated to get the better of them”. 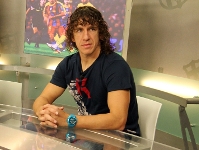 Hardest thing is to stay at the top

Barńa are once again the team to beat, but after two years ruling La Liga the teams below them are getting stronger all the time and Puyol admitted that winning more titles: “is going to be difficult and the other teams won’t be making it easy for us. That just has to motivate us more and if we can pull it off again, then that makes it an even more impressive success”.