Pep Guardiola paid tribute to his team’s performance after their win over Villarreal who he also praised, claiming: “they really impressed me".

Guardiola was clearly pleased with the result and also with the entertainment offered up to the Nou Camp faithful, insisting: “it was a top notch game”. The boss also highlighted the part the visitors had played in producing such a good match: “they(Villarreal) are the team who we’ve faced who have been at the highest level and it wasn’t easy to beat them – that says a lot for them”. 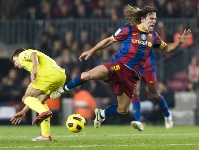 The boss reiterated: “there are few teams who have impressed me as much as Villarreal and if we’d not been up to the level they demanded of us in this game, we would have lost. They are a tough team to attack and defend against and I really value this win very highly indeed”.

Carles Puyol played his 500th game for the club tonight and Guardiola and the team dedicated their victory to the captain. Guardiola claimed: “Carles is one of the role models for people at this club. He has so much desire to compete”.

Éric Abidal partnered the captain at the heart of the defence against Villarreal and he was also the object of the boss’ admiration: “he was spectacular. When we decided not to sign any more centre halves, one of the options we knew we had was Abidal in that position. He’s been a great help “.

Thumbs up for Afellay deal 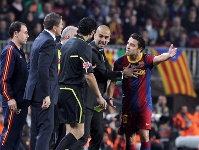 Andoni Zubizarreta and Sandro Rosell have confirmed that the club are in negotiations to sign Ibrahim Afellay and Guardiola told the reporters at his press conference: “if you have been told about it, that’s because we have given it the thumbs up”, whilst not revealing if the player would be coming in the winter transfer window or next summer. 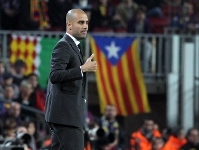 Rosell: “our fans are phenomenal”

Club President Sandro Rosell also spoke after the game and praised the Nou Camp crowd: “they are getting behind us more with every game. Our supporters are phenomenal, perfect – they are the best.

The President also praised Villarreal’s performance, claiming: “they are maybe the toughest opponents we’ve had so far in the league – because they play so like we do ourselves”.