B team defenders feature in training

B team defenders feature in training

Barça had their second to last training session on Friday before playing Vila-real. They were joined by four reserves, including Bartra and Fontŕs, who Guardiola may use to cover the gaps in defence.

The focus is still Saturday’s league game at the Camp Nou with Vila-real. Today’s session at the Ciutat Esportiva Joan Gamper started behind closed doors at 11.00 am, and the 17 participants included four from the side coached by Luis Enrique.

Piqué and Adriano with group 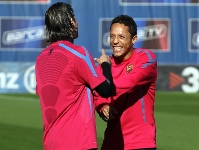 The only players missing were the injured Milito, and Pinto with special permission to be absent. Jeffren is still recovering from injury, but did join in with all of the non-contact exercises.

Piqué, who is suspended tomorrow, and worked out alone in the gym yesterday, trained normally today, as did Adriano, who has made a quick recovery from gastroenteritis. 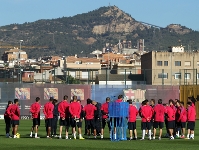 The four Barça B players at the Ciutat Esportiva Joan Gamper today were goalkeeper Rubén Mińo, Thiago Alcántara, Marc Bartra and Andreu Fontŕs. Considering Guardiola’s defensive woes against Vila-real, with an injured Milito and suspended Piqué, meaning he only has 16 first team players available, the manager is likely to draw on the B team for centre back cover.

The usual warm-up drills were followed by some gentle fitness training. As usual on match days, the squad will train again on the morning of the match at midday, which this time will be behind closed doors at the Camp Nou at 12.00. 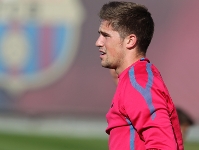 The goalkeeper was not in today’s training session because he has travelled to Nyon (Switzerland) to make a statement to the UEFA Appeals Committee regarding the two-match suspension he has been given following the game with Copenhagen at the Camp Nou. Pinto has already served one match, which was that which Barça played in Denmark on November 2.