Maxwell not worried about Madrid date

Maxwell spoke to the media after this morning’s training session and the big issue for the press was the date of the Barça-Madrid game.

Maxwell reckons the squad aren’t too bothered when the game is played, claiming: “the most important thing is that we are all okay, well prepared and we put in a good performance”.

The Brazilian explained that the players hadn’t really talked about the decision to play the game on Monday November 29th – “it’s a strange day to play, not usual, but we haven’t talked about it much, but I guess we have to understand the political reasons for it”.

Concentrating on next two games 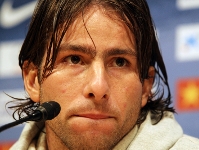 A large part of the press conference was concerned with the reactions to the date the game has been scheduled for, but Maxwell insisted on the importance of the games against Villarreal and Almeria: “nobody, neither Barça nor Madrid, will come into the game better than the other team, but the important thing isn’t how we come into the game, but how we come out of it. Right now we have to keep on focussing on getting all the points we can and come into the match full of confidence”.

Switching attention to Saturday’s game, Maxwell explained: “Villarreal have some players who are really in form right now. They have a strong attack and they play the ball about really well. They have a style of play that is very competitive for us. It’ll be a difficult game and we’ll have to go into it at our best to get a good result”. 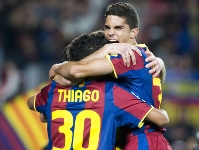 With Milito injured and Piqué suspended, Guardiola finds himself with just one recognised centre half in the squad for Saturday’s game and he’ll have to choose between using Abidal or a B team player there against Villarreal. But what about Maxwell himself? “I’d love to be out there and helping the team, but I’m sure that the B team lads would do a better job than me!”, he confessed.

Role of the youngsters

Continuing his theme, Maxwell praised the B team players who figured on Wednesday night: “I’m very confident about the group we have. The youngsters from the B team are contributing in a decisive manner. The boss knows very well when to give them a run out and he like to give them opportunities and that we help as much as possible”. 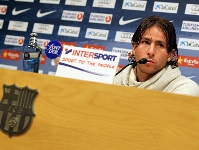 Gaby Milito’s injury was the only bad news from Wednesday’s game. The Argentinean scored the second goal, but then limped off with a hamstring injury that will see him miss the next 4-6 weeks and Maxwell revealed: “he looked very down. This is an injury that doesn’t just affect him, but also the rest of us. We love his work and his contribution, so let’s hope he recovers okay and as soon as possible ”.