Millito out for four to six weeks

Millito out for four to six weeks

Gaby Milito has been ruled out for between four and six weeks by the FC Barcelona medical services after suffering an thigh injury in the game against Ceuta in the Copa del Rey on Wednesday evening.

The central defender limped out of the action in the 38th minute and was replaced by Éric Abidal during the 5-1 triumph.

Milito had just come back from a knock that he suffered on October 18 when he pulled the muscle on the inside of his thigh during training. 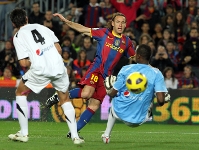 It was a bittersweet evening for the Argentinian against Ceuta as he scored early on when meeting Nolito’s corner to make it 2-0 with seven minutes on the clock. That was his second goal for Barça nearly three years after his first. 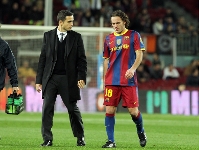