“We passed with flying colours”

“We passed with flying colours”

Josep Guardiola was proud of the way that his players went about beating Ceuta on Wednesday night and ensuring that they progressed to the next round of the Copa del Rey.

FC Barcelona beat their visitors 5-1 and the boss was pleased: “We passed through a dangerous tie with flying colours,” he said. “I value that result and am very pleased to have made it into the next round. We want to continue on the same line as we have been and the players showed the same today as they did when we played in Ceuta.”

One blot on the evening was the injury to Gaby Milito, who is sidelined for at least four weeks. “It is a shame,” Guardiola continued before reflecting on the next game, where he will be without the suspended Gerard Piqué. The boss commented that a youth team player will be promoted. “There will be no other choice,” he said. The rest of the evening was great though.” 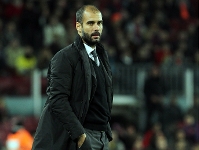 On Ceuta’s performance Guardiola stated: “They are very well organised and went forward when they had the ball. They also scored a goal and, although we managed to score five, it was not easy for us to find ways of breaking them down. I wish them luck.”

Lionel Messi entered the fray in the second half and Guardiola explained why he chose to use the forward. “He did not train today and told me he wanted to play for a while,” he explained. “It was also for the people who had come to cheer us on. They deserved to see the best and he likes to play and said he wanted to.”

Around 39,000 fans watched the game inside Camp Nou and Guardiola was content. “I hope they enjoyed it,” he said. “We know what the fans are like, unique and unbeatable.”

Thiago was again given time to experience life at the top and Guardiola was pleased with the youngster. “He can still grow so much more,” the coach stated. “I want to congratulate him for the way he played. He is a daring player and has the capability of unbalancing any opposition with his great natural talent. He is young, quick and confident. He has no fear and I knew him in La Tercera and he did the same things. He lacks a couple of things to be the finished article and I have no doubt that he will go on to be just that.” 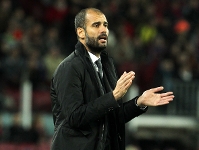 The FC Barcelona coach was keen to remind the rising youth team stars that they need to remember where they are. “I always tell them that they have to be thankful to Barça,” Pep Guardiola said. “They are in a unique place, unbeatable, and they are privileged. In football you have to be audacious and they are. That is why we have such faith in them.”