Barça face a La Liga and Cup double this week, with games on Wednesday and Saturday, as well as the official squad photo, scheduled for Thursday.

With two games in four days, the squad trained on Monday, and they will be under Guardiola’s orders every day this week, with just Sunday as a break.

Cup night on Wednesday at the Nou Camp 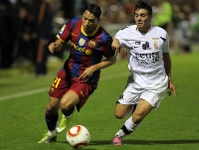 The first of the two games at the Nou Camp this week will be on Wednesday when Ceuta visit for the second leg of their Spanish Cup tie. Barça go into the game on the back of a two nil win in North Africa a fortnight ago. The squad will begin preparations for the Cup game on Tuesday, when Guardiola will be without seven of the players he’s decided to rest - Alves, Puyol, Busquets, Xavi, Iniesta, Villa and Messi, who will be replaced by B team players.

The day after the Cup game, the squad will assemble before training for the 2010/11 Official Photo and then start planning for Saturday’s game against third placed Villarreal which kicks off at 22.00 on Saturday night at the Nou Camp. The squad will train again on Friday and then behind closed doors at the Stadium at lunchtime on matchday. 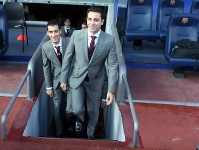