League Round Up Week 10

League Round Up Week 10

Villarreal kept up their challenge ahead of next week’s visit to the Nou Camp with a 4-1 win over Bilbao, whilst Real Madrid also won to stay top - taking the Madrid derby 2-0 – and Espanyol are up into fourth following win.

There were wins for most of the top teams with only Atletico Madrid and more surprisingly perhaps, Mallorca failing to take maximum points. Mallorca’s defeat at Zaragoza means there are now no teams without a win in La Liga, though Zaragoza remain in the drop zone, one place above Malaga.

Fernando Llorente bagged his seventh league goal of the season to put Bilbao one up early on at Villarreal, but the hosts’ own goal machines, Nilmar and Rossi who’ve scored 13 between them so far this season, helped the hosts to a comfortable 4-1 win. After Nilmar’s equaliser, Cazorla made it 2-1 on the stroke of half time and once Aurtenetxe had picked up his second yellow on 76 minutes, Rossi and Montero made it 4-1, to make it 13 goals for and just one conceded in Villarreal’s first five home games. Villarreal stay third, two points behind Barça who are a further point behind Real Madrid, 2-0 winners of the Madrid derby thanks to two goals in the first 20 minutes from Carvalho and Ozil in a game Atletico’s Diego Forlan summed up as: “two mistakes, two quick goals - errors in games like these are key”.

Espanyol continue to get the results, if not the goals, at home, sending Malaga bottom with a 1-0 win on Saturday thanks to an early Javi Marquez strike. Pochettino’s team have won all five games at home so far, though only managed eight goals, which combined with their single strike on the road makes them the lowest scoring team on the top half (all the bottom three teams have actually scored more goals than Espanyol so far and only Almeria and Deportivo, with eight apiece have scored fewer!). With Seville and Valencia playing Monday, Espanyol’s Champions League position may not last, but it is still a great start from a team who struggled for most of last season.

Malaga’s defeat was a tough start for new boss Pellegrini, who watched the game from the stands, and sent his team to the bottom following wins for both Zaragoza and Deportivo. Zaragoza’s epic 3-2 win over Mallorca, their first of the season, came courtesy of a 96th minute penalty from Gabi. Mallorca had gone ahead twice though Webo and Pereira before Lafita and Bertoli pulled Zaragoza level to set up the dramatic winner. The three points lifted Zaragoza off the bottom, above Malaga on goal difference and a point behind Levante who went down 1-2 to a resurgent Deportivo, who are unbeaten in their last three league and cup games. Hercules are now just a point ahead of Levante after losing 3-0 to Osasuna in Pamplona, level on points with Almeria who recorded their fourth home draw from five when they were held 1-1 by Sporting. 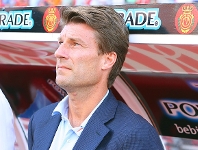 Real up to sixth

Newly promoted Real Sociedad recorded their fourth win in five by beating Racing 1-0 on Saturday to lift themselves into the UEFA spots. Joseba Llorente was on target for the Basques who seem to have bounced back from a poor start and have now won four of their five games at Anoeta so far this season.