Barça’s winger told reporters after training today: “I’m happy to have scored in the league – it was about time!”, as well as expressing his conviction that the team is on the right track ahead of the big game with Real Madrid this month.

Pedro had already scored in the Champions League and the Spanish Cup and on Sunday he bagged his first of the league season when he scored Barça’s third of the game at the Coliseum Alfonso Pérez: “it was about time I got a goal in the league. I’m happy because we played well as a team and I felt fine out on the pitch. I demand of myself that I take part and work hard in training to ensure I’m in the starting line up and help the team. I like scoring and I think I’m in good form right now”,

Hard work is the key 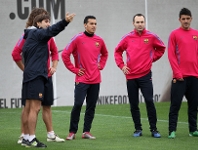 Last season, Pedro scored in every competition and got 12 in the league, but he’s had to wait to get off the mark in La Liga this season. That doesn’t seem to have worried him too much though and he reckons: “the goals come, sooner or later. I got a lot last year, but I’ve not been so lucky in front of goal so far this season. However, I’m working hard and I’m not worried. The important thing is hard work and that the team is winning”. 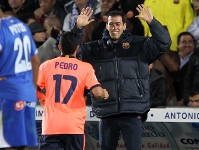 Pedro was also upbeat about how the team are playing: “we put in a great first half in Getafe and when we play like that it’s hard to beat us. I think we are the team who are playing the best football. We are better than we were a few months ago. We’ve got our form back, we’re playing well and that is the road we have to take”.

Games to go before the Madrid clash 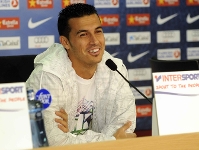 Pedro didn’t want to be drawn on the upcoming Madrid game, preferring to stress: “it’s a very important game, we are all aware of that, but we have four games to go before that and we have to deal with them. I think to say that that game could decide the game is a little too early. All the games we have are tough, though it’s true that both of us seem to be dropping very few points”. 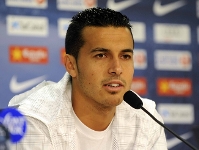 Pedro was full of praise for his two fellow goal scorers in Getafe. “Messi, apart from all the magic he shows on the pitch that makes him the best in the world, works hard and with his pressing he helps us all. He’s at a really high level, like he always is. It’s hard to find the words to describe how good he is”. As for his Spanish team mate, Pedro explained: “he brings hard work and he’s got great movement. He ‘s fit in really well and I’m sure he’ll keep on scoring”.